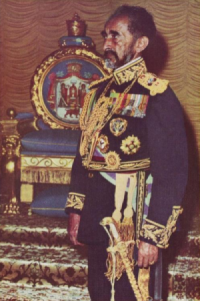 Selassie I on Spirituality:

"The temple of the most high begins with the human body, which houses our life, essence of our existence. Africans are in bondage today because they approach spirituality through Religion provided by foreign invaders and conquerors. We must stop confusing religion and spirituality. Religion is a set of rules, regulations and rituals created by humans which were supposed to help people grow spiritually.

Due to human imperfection religion has become corrupt, political, divisive and a tool for power struggle. Spirituality is not theology or ideology. It is simply a way of life, pure and original as was given by the Most High. Spirituality is a network linking us to the Most High, the universe and each other. As the essence of our existence it embodies our culture, true identity, nationhood and destiny. A people without a nation they can really call their own is a people without a soul. Africa is our nation and is in spiritual and physical bondage because her leaders are turning to outside forces for solutions to African problems when everything Africa needs is within her. When African righteous people come together, the world will come together. This is our divine destiny".

Haile Selassie I of Ethiopia, 1960

H.I.M. Haile Selassie I Speech to the United Nations:

"…until the philosophy which holds one race superior and another inferior is finally and permanently discredited and abandoned: That until there are no longer first-class and second class citizens of any nation; That until the color of a man's skin is of no more significance than the color of his eyes; That until the basic human rights are equally guaranteed to all without regard to race; That until that day, the dream of lasting peace and world citizenship and the rule of international morality will remain but a fleeting illusion, to be pursued but never attained; And until the ignoble and unhappy regimes that hold our brothers in Angola, in Mozambique and in South Africa in subhuman bondage have been toppled and destroyed; Until bigotry and prejudice and malicious and inhuman self-interest have been replaced by understanding and tolerance and good-will; Until all Africans stand and speak as free beings, equal in the eyes of all men, as they are in the eyes of Heaven; Until that day, the African continent will not know peace. We Africans will fight, if necessary, and we know that we shall win, as we are confident in the victory of good over evil…"

Haile Selassie I of Ethiopia, 1963

Haile Selassie I on Tolerance:

"Since nobody can interfere in the realm of God we should tolerate and live side by side with those of other faiths. In the mystic traditions of the different religions we have a remarkable unity of spirit. Whatever religion they may profess, they are spiritual kinsmen. While the different religions in their historic forms bind us to limited groups and militate against the development of loyalty to the world community, the mystics have already stood for the fellowship of humanity in harmony with the spirit of the mystics of ages gone by. "No one should question the faith of others, for no human being can judge of the ways of God."

Haile Selassie I of Ethiopia

"What we seek is a new and a different way of life. We search for a way of life in which all men will be treated as responsible human beings, able to participate fully in the political affairs of their government; a way of life in which ignorance and poverty, if not abolished, are at least the exception and are actively combatted; a way of life in which the blessings and benefits of the modern world can be enjoyed by all without the total sacrifice of all that was good and beneficial in the old Ethiopia. We are from and of the people, and our desires derive from and are theirs.
Can this be achieved from one dusk to the next dawn, by the waving of a magic wand, by slogans or by Imperial declaration? Can this be imposed on our people, or be achieved solely by legislation? We believe not. All that we can do is provide a means for the development of procedures which, if all goes well, will enable an increasing measure and degree of what we seek for our nation to be accomplished".

Haile Selassie I of Ethiopia, 1966

Haile Selassie I on Material and Spiritual Progress

"Knowing that material and spiritual progress are essential to man, we must ceaselessly work for the equal attainment of both. Only then shall we be able to acquire that absolute inner calm so necessary to our well-being. Whenever conflict arises between material and spiritual values, the conscience plays an important role and anyone who suffers from a guilty conscience is never really free from this problem until he makes peace with himself and his conscience.

"Discipline of the mind is a basic ingredient of genuine morality and therefore of spiritual strength. Spiritual power is the eternal guide, in this life and the life after, for man ranks supreme among all creatures. Led forward by spiritual power, man can reach the summit destined for him by the Great Creator".

"It is our conviction that all the activities of the children of men, which are not guided by the Spirit and council of God will bear no lasting fruits; they will not be acceptable in the sight of God. It will therefore come to naught as the tower of Babel came to naught. The grace of God is Eternal. Angels in Heaven and the Creation on Earth sing His Praise . We thank the Master of the world Almighty God. Power belongs to God. May God Our Creator, the Helper and Guiding Light of us all grant you His Wisdom that you may bear fruits for His Glory."

Read a lot more speeches of His Majesty on:

Login or  register to leave a reply.

Welcome to the realm of
the Almighty King!
Please take a breath, relax yourself and take a good look around.
Dont forget to leave your mark in the 'Visitor World Map' section!

Watch all align resolving thing blending into order When the th...